IT has come a long way from the days of merely supporting the business from afar. At the risk of sounding like an IT zealot, I must remark that IT is, today, a means by which all business is done.
Home Growth Consulting Is Your It Department Treated Like The Underdog?
  
By Kerushan Govender Growth Consulting May 7, 2019

IT has come a long way from the days of merely supporting the business from afar. At the risk of sounding like an IT zealot, I must remark that IT is, today, a means by which all business is done. Try to remember the last time you were involved in a business transaction where technology did not form any part of executing the transaction. Let’s say you walked into a grocer, picked up a bottle of milk, paid for it in cash and left. Even in such a limited and simple transaction, it is likely that the till-point was automated, or at the very least, the milk arrived at the store as a result of a logistics and distribution system.

Let’s test the concept further. Consider that for most cities around the world, the city lights and the water supply into the city (not to mention the several other city services like emergency services) is controlled and managed by IT systems. The same applies to the banking systems of the world. Your “ownership” of money is based entirely on the information available on bank databases. If a computer system were to erroneously put an additional few zeroes at the end of your bank balance, you would find yourself entitled to a sudden fortune. One’s wealth is dependent entirely on the correctness of information sitting on computers. It’s an interesting point that if all the world’s computers were to suddenly go berserk, there would no longer be records of ownership of the world’s assets, and so the world will be thrown into a complete chaos. Theoretically, there would be no rich, and no poor.

While this may be of more concern to some than others, the truth is that if someone wanted to hold a city ransom, or rob a bank, all he would need to do is intercept the systems that run the city or the bank. And that’s the truth of it. This brings a new perspective to the subject of IT Security, a topic often regarded as unexciting and dreary.

Why, then, is it that IT is regarded as an underdog in so many of the world’s organizations? Why is it not uncommon to find a CEO who regards IT as just a big expense? How can IT take its rightful place on the executive centre stage?

This may result in questions emerging in the IT department about the specific systems that contribute toward success on that metric, both in the company and outside. When purchasing decisions are made by IT, the impact of new systems on that metric should be explored. If there is a big impact on the metric, that purchase and implementation should be prioritized. Every time the metric improves, it should be celebrated by IT.

These changes will not escape unnoticed by general management. It will be found that IT projects are more streamlined, and that fewer superfluous requests are being sent by IT to the board. In fact, IT personnel start becoming more and more entrenched in business decision making, and will be looked to for input.

I have dealt with several CIOs and IT Managers who were in despair at not be treated with sufficient seriousness by the business. To summarize and group the common sentiments shared by many, they complained that their requests were hardly given priority, and that they were consistently being suffocated by budget cuts. Luckily, I got to see the action recommended by this article implemented at a few clients. The results were pretty uniform. In all cases, the IT department became the first port of call on business expansion plans.

And so the journey to the rightful centre stage begins with a first step taken by IT.

Kerushan Govender / About Author
Kerushan is the Founder and Principal Growth Consultant at Blacfox. He has a passion for enabling personal and business growth through productivity and service.
More posts by Kerushan Govender 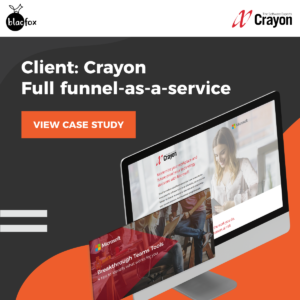